"Rotraut Uecker (born in 1938) has always considered - even decades after the death of her husband - that their encounter was a love at first sight organized by fate, by chance arranged by cosmic forces that surpassed them, but in which both believed.

When Yves Klein (1928-1962) meets the young woman for the first time, she is not yet twenty. Originally from East Germany, she is the sister of Gunther Uecker, nine years her elder, and it is thanks to him that she will get in touch with Klein. He learns that Arman is looking for a young au pair to take care of his three children. The family lives in Nice. The artist then engages Rotraut, whose relations with his parents are almost non-existent. It is in the house of Nice that she will see a small painting in front of which she will fall in admiration. He is from Klein. The latter knocks one day at the door. Too shy, she does not answer. But, a little later, the meeting takes place and it is like a lightning evidence: they consider themselves twins, made for each other. "They will not leave each other. She will become his companion, his assistant, his model, his muse, his alter ego, his soulmate. "

Rotraut is of great beauty, limpid and almost immaterial. Yves, who is twenty-nine years old in this year 1957, is a very religious artist. His work already begun and that which he will accomplish until his death, in 1962, is a mystical approach, in complete contradiction with the often crude and ironic interpretation that is made of it. Far from being a joke, a series of sterile happenings, far ahead of those who will multiply in the late 1960s, far from being a kind of art scam, his work is in a cosmic vision and mystic that Rotraut shares. They both exchange, she recalls, "the same relationship that I maintained with the cosmos, a certain vision of the world and a mystique of art. Yves and I had a common imagination, common visions. » (...)

Between Rotraut and Yves, something deeply poetic begins. Both are carried away in an adventure that could be described as Rimbaldian, similar to that of the poet of Charleville-Mézières, bringing back, in his Letter of the seer, his new conception of poetry, visionary, compulsive, crazy. At this time, Klein embarked on monochrome painting, choosing pure colors which he covers the canvas with a roller, to signify that they are in themselves carriers of an imaginary, a sensitivity immaterial, a revelation that erases representation and allows access to pure light. It is from this approach that he creates the famous International Klein Blue (IKB), a medium of the infinite, the first and immediate access to the spiritual. The love that binds him to Rotraut is fusional and intense, he accomplishes it in a certain way. Installed together in Montparnasse, rue Campagne-Première, they inaugurate an experimental type of painting that is never gratuitous or aesthetic but, on the contrary, full of a deep meaning, at first misunderstood by critics and the general public. .

But Yves and Rotraut, in their constant desire to lighten the painting of tradition and customary uses, in love with air and emptiness, fire and pure color, are engaged in a singular and spectacular work at the time. Their intimacy in the work joins that of the bodies. "Our baby, report-such, it was the art, we surrounded it of delicate cares, we nourished it. I will always remember the pleasure of stirring Yves' painting with a stick. Klein then attends the Zero group of which Gunther Uecker, Rotraut's brother, is a member. This small international society, having as a project to make a clean sweep of the past, conceives the movement as an exorcism, a way of renouncing defensively what it calls "archaic oxidation", a desire to "de-clutter [...] the bankruptcy of humanity ". She proposes to look for light, because it is through her that space has its sensitivity, its atmosphere. Klein is seduced by these avant-garde theories and participates with Rotraut in the work of the group, sponsored by Lucio Fontana.

Through the encounters he makes at that time, his taste for performance begins to manifest. The most emblematic remains that of his marriage with Rotraut, literally staged and imagined by him, on January 21, 1962. Hedge of honor at the exit of the church of Saint-Nicolas-des-Champs, in Paris, composed of knights of the order of San Sebastián, reception at La Coupole where each guest is invited to drink a cocktail ... blue, late evening in the workshop of Larry Rivers, also a fan of performances (he will participate later in the tables exploded in the rifle of Niki de Saint Phalle).

In 1960, Klein organized "anthropometric" performances, which ritually consisted of "monotonous" concerts, in which an orchestra repeated the same sound for twenty minutes before leaving another twenty minutes of silence in which three naked models appeared. , brush the body with blue liquid and, under his direction, rub against canvas stretched against the walls or the floor, symbolizing shrouds, leaving the final appear abstract and lyrical, musical forms. These "anthropometries" betray, according to the artist, the life course of human energy. Both spouses are used to saying that they have been "chosen" by some superior force. As the artists in their group were chosen by cosmic energy, and never by chance. Rotraut saw this love as a grace: "This dream that I rocked teenager, dance, nudity, purity, I realized thanks to Yves. The body paints "anthropometries" is the link between the intimate and the universal. He is both subject and object, brush and painting, gesture and beauty. Matter and eternity. Every day, Klein enters the field of this eternity ...

Until the end of exhaustion In a beautiful short film made in 1966, four years after the death of her husband, Rotraut is interviewed. The fragile grace that adorns her, her diaphanous beauty, her emotion visible to every word she utters, this way she has to speak while barely opening her mouth, as if the sweetness of her words came out of her by magic, still betray her. the tragedy that rocked his life. She is four months pregnant when Klein continues her "anthropometries". What will be his last painting is the fruit of an intense work of which Rotraut bears a painful guilt. The years 1960-1962 are in fact those of a creativity such as it will carry him towards a kind of exhaustion and restraint of which it does not quite measure the effect on his organism. Yves works continuously. These days of March 1962, he began his new work. On a panel three meters long, he has already imagined the choreography: there will be models, fire, blue and pink too. The performance happens in an industrial warehouse. It's cold. Klein wields a starter of dozens of pounds. It is a great ceremony, so solemn that everyone is silent, obeys the orders of the officiant. "We were all aware," recalls Rotraut, "of attending a historic act. On the panels prepared and framed, Klein "positions the fles differently for each, imagining choreographies and poses that seemed incomprehensible to us". The artist then went "at the end of his strength," according to the story of his wife. She herself experiences this exhaustion; "Curled up" on a step, she looks at the mythical scene and her husband evolve, carrying at arm's length his lance-fames, licking the panels in a din worthy of a furnace. Previously, he sprayed the bodies of the two models with water and then coated them with pink and blue pigments before asking them to press against the panels to "print" their tracks. In the vacillation of fames, as in a hallucinated dream, the two silhouettes appear and disappear.

Klein thinks he has finished his job, but Rotraut points out that he has forgotten a sign. He then resumes the work despite his fatigue. "For a long time, I wanted to, I thought I should not have told him. I felt responsible for what followed a few weeks later. ". Klein collapsed from exhaustion June 6, 1962. Rotraut will give birth to their son, Yves, two months later, day to day. She will remarry in 1968 with a young comedian, Daniel Moquay, and will be keen to promote Klein's work with him, while devoting himself to his own." 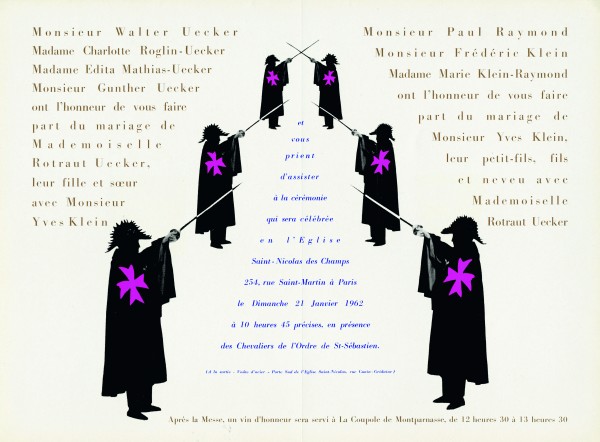 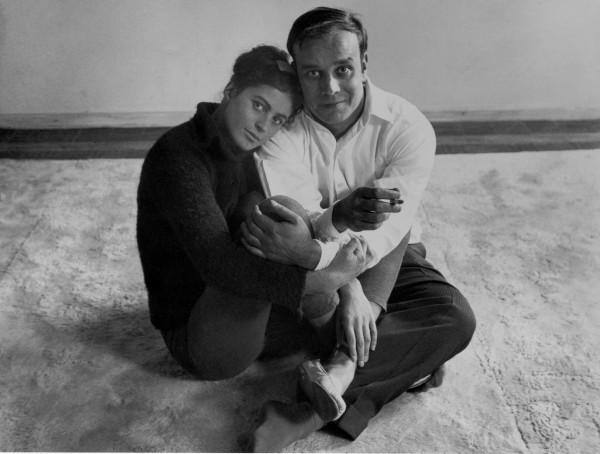 Yves Klein and Rotraut's portrait in their appartment

Yves Klein and Rotraut on a trip to the United States 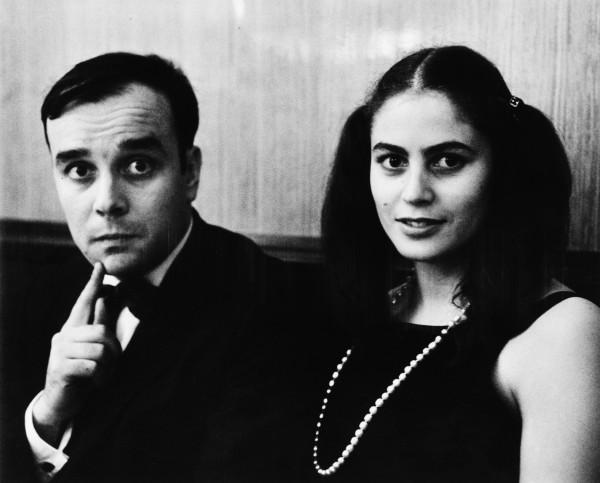 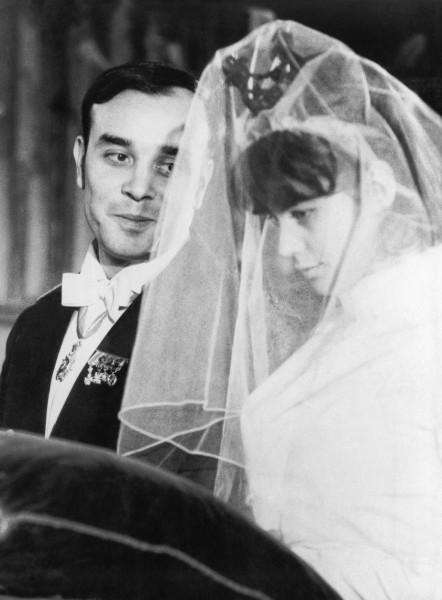