At the end of February 1961, after the opening of his retrospective exhibition at the Krefeld Museum in Germany, the French artist Yves Klein took leave of the Director, Dr. Wember, and went with his future wife Rotraut Uecker, to the convent of Santa Rita da Cascia, near Perugia, in Umbria. The purpose of this journey was to deliver an ex vow offered to the Saint.

He was to hand it over without making himself known, to the turn sister at the cloister door of the convent of the Augustinian Sisters. The Augustinian nuns live by the rules of St. Benedict, which are "alleviated" when they look after the sick or serve in hospitals. The convent of Santa Rita da Cascia is exclusively responsible for the upkeep of the sanctuary and for the cult of the Saint.

The votive offering deposited by Yves Klein in February 1961 consisted of a transparent plastic casket measuring ap-proximately 22 x 15 cm, and divided into several compartments. The top part was composed of three containers filled respec-tively with ultramarine pigment (the I.K.B. blue), pink pigment (monopink) and gold-foil (monogold). The full length of the bot-tom part contained three gold ingots of dif-ferent weights, resting on a bed of blue pig-ment. The fine gold ingots were the pro-duct of the first four sales of zones of im-material pictorial sensibility. Yves Klein sold for the price of gold zones of sensibili-ty, of space in its pure state impregnated with his presence. The deal was transacted by cheque. If the buyer was prepared to burn the cheque, that is to say, his deed of ownership, completely, then all the gold would be returned to the cosmos. If not, only a part of the gold was thrown into the Seine, and the other part came back momentarily to Yves Klein, who remained its depositary only in a provisional and precarious manner. The first four sales of immaterial space took place in Paris. The purchasers were, in chronological order, Peppino Palazzoli (18 November 1959), Jac-ques Kugel (7 December 1959), Paride Ac-cetti (7 December 1959) and Alain Lemee (8 December 1959). In his ex voto Yves Klein offered St. Rita the gold of which he had become the temporary trustee following these first transactions, three of the pur-chasers having kept the cheque-witness whilst the fourth had later destroyed his, some time after the sale.

The central part of the casket consists of a broad slot in which was deposited a text handwritten by Yves Klein on seven sheets of paper held together by a very thin cotton thread. The text constitutes a veritable hymn of thanksgiving to St. Rita. After having thanked her for previous favours granted, Yves Klein places himself under the protection of the Saint and invokes her aid to assure the success, beauty and everlasting survival of his work.

This anonymous ex voto had been kept by the nuns in the offerings depository at the sanctuary. Following the earthquake of 1979, which had damaged the cupola of the Basilica and its frescoed walls, rebuilding became necessary. Rosario Scrimieri, the architect in charge of the works, appointed the painter Armando Marocco to execute a set of modern stained glass windows for the presbytery of the Basilica. While engaged in this work the artist happened to need some gold-leaf and asked the convent for some. The sisters brought him Yves Klein's votive offering.

Marocco remembers: "On the day of the remarkable discovery of Klein's work, on Friday 21 December, since some gold-leaf was needed for work on the windows, we asked the Mother Superior whether by chance they happened to have a little somewhere. Shortly afterwards a packet was brought to us which contained leaves of the purest gold, and some brochures with a little box inside apparently containing coloured powders for the restoration of frescos. While the architect Scrimieri was carefully analysing it after his surprise at the contents and at the oustanding way the perspex container had been made, I realized that we had stumbled upon a sensa-tional discovery: a work by Yves Klein dedicated to St. Rita da Cascia". When he got back to Milan, where he has lived for many years, Marocco contacted me through the intermediary Guido Le Noci (the "inspired" dealer at whose gallery I presented on 2 January 1957 and for the first time in the world, Yves Klein's Blue Period, the first IKBs). The meeting took place on 19 May 1980. An appointment was fixed with the ecclesiastic authorities for the following 18 June at Cascia. I was thus able to converse with the Mother Superior of the Convent for nearly an hour in the visiting parlour, to authenticate the ex voto, to have photographs taken of the work and photocopies made of the text, with the consent of the hierarchy. I knew all about Yves Klein's devotion to the cult of St. Rita (a very popular cult at Nice, Y.K.'s birthplace). He had been in-itiated into it by his aunt, Rose Raymond-Gasperini, and had acquainted me with his previous pilgrimages to Cascia. He had been there twice before 1961, to pray to the Saint of "desperate" causes and to beseech her aid in important and critical moments of his career.

I am convinced that the ex voto is not the only offering by Yves Klein to the Saint, as is witnessed by a copy of the Krefeld catalogue which is personally dedicated to her and which is kept at the Convent. The text which has just been rediscovered testifies in no uncertain terms to the depth and truth of Klein's faith. The in-vocation of Saint Rita. and the appeal to her intercession constitutes the pivot of prayer in Yves Klein, the apex of his spiritual practice within this dogmatic ritual, with its references to God the Father, to Jesus Christ the Son, to the Ho-ly Spirit and to the Virgin Mary: his meditation upon Absolute Art, the Void, the Vital Energy.

The publication of this document is particularly significant, now that the 6th centenary of the birth of the Saint is being celebrated. 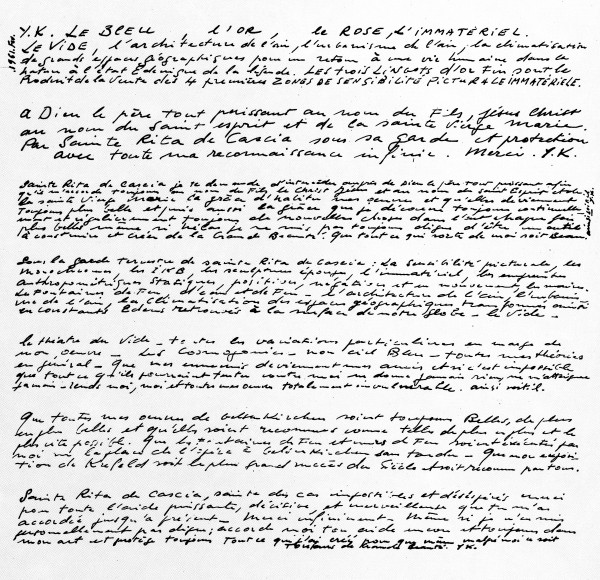