Making new beauties out of its audacity. Paintings of fire! It was in March and July 1961 that Yves Klein finally carried out his project. The Centre d'Essai de Gaz de France, in Saint-Denis, agreed to provide him with the necessary workshops and equipment. More than 150 works on cardboard were produced.

The films and archive photographs show Yves Klein with the torch in his hands. A white, liquid fire blows. The flames melt on the cardboard and spread.

When it is all over, it is there, in front of us. The flame has deposited a depth. An amber space. And in this stillness, halos float. Something suddenly visible. Golden limbs, suspended in an atmosphere of powder. One guesses vague shapes. They could be plumes, sprays of light, blazes. But no, it is none of these. The invisible flesh of fire. This is what Yves Klein has just made visible.

"What provokes in me this search for the imprint of fire? To achieve a supernatural image. Through a photographic process: "The painting is only the witness, the sensitive plate that has seen what has happened".

Like the flame, Yves Klein was the ultra-living. Biting, limpid and flamboyant. He died at the age of thirty-four, leaving behind an immense and overflowing body of work, concentrated in a few years.

Uniting fire and water. Extracting the image. How did he do it? While he applied the violent and impalpable flesh of the flames with his torch, Yves Klein sprayed the cardboard at point blank range. Before it pulverises into steam, the water burns instantly. Trickles, splashes: against all odds, the flame records these traces on the surface of the cardboard.

Like the feminine and the masculine, the flame and the water compare their forces and exchange their qualities. One liquefies, the other ignites. Such was to be the prodigious fountain, an unfinished project, imagined for the esplanade of the Palais de Chaillot, below, facing the Eiffel Tower. The power of the original elements. The water shot from a battery of cannons and smashed, several dozen metres away, against the base of four gigantic flames. As it fell on them, it fanned them into a violent crackle. The powers were reversed. Packets of steam. Flaming jets. Water was in her forge.

To force fire into its secrets is to question the origins of nature. Every flame, however small, gives a glimpse of older fires. The very first fires of the earth and the cosmos. For fire is always the same. In every flame, it is as intact as on the first day. Fascinating.
In his paintings of March and July 1961, and probably 1962 as well, Yves Klein brings up a naked image of the material of fire. He makes it dream from its dreamlike depths. He did not invent this image. He drew it directly from the fire. Fascinated.
The flames, by breathing something of themselves into the cardboard, deposit what Yves Klein calls their immaterial flesh. How to describe it? To approach its nature, one would have to use the old term "element". This flesh of fire is a noble and primary material. From the fluidity of flames, liquid and burning, Yves Klein translates an immaterial, like a spirit of alcohol.

The Fire Paintings offer a metaphysics in the most beautiful and stunning way. If it is possible to reveal this flesh of fire, then other kinds of immaterial flesh might become perceptible. Through the resources of art.

IKB Monochromes, Anthropometries: all these works must be related to Fire Paintings, in the coherence of a work.
Colour is what best allows us to understand immaterial flesh. Yves Klein plunges us into its impalpable element. Its pure dimension. IKB blue is elemental like water and fire. A deep, matte ultramarine that draws you in, immerses you and radiates. Its inner flesh is only a variant, a glimpse of the great flesh of the world. Faced with the monochrome, between his flesh and ours, a physical affinity may arise.

Flame. The living brush in the Fire Paintings as in the Anthropometries where the female body transfers its blue flesh onto the canvas, like the amber flesh of the flame on the cardboard. The brush traces itself.

In 1961, in the workshops of the Centre d'Essai du Gaz de France, Yves Klein combined the two types of work. Under his direction, young models applied their bodies to the cardboard. He lifted the contours by spraying water, then blew out the flames. Wet surfaces burn more slowly than dry ones. Then a previously invisible silhouette emerges. The model can also leave an imprint of his body covered with a thin film of water. Here too the fire does its work. In an atmosphere of golden limbo, the coloured shape of the breasts, belly and thighs emerge and reveal themselves. 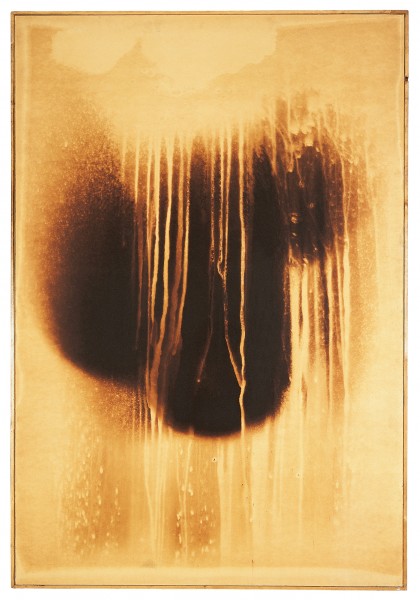