In 2006, the architect of the "oblique function" Claude Parent remembered Yves Klein:
"... It can not be said that he was a tenant of utopia. I think he's an inventor of a different world that has such deep relationships with the past as with what may come next. No chaos at Yves monochrome, but a great desire to invent; the field of the possible is open. Yves Klein stands among the first to put his action, his actions, as a constructive idealism at the service of art. He participated in the Zero group, hence his familiarity with Germany, to the creation of the "New Realists". The famous vault of space painter, November 27, 1960, photograph immortalizing the creative gesture in Fontenay-aux-Roses, multiplied by the publication of a newspaper, is his devotion to the immaterial, its definitive liberation from the future elements that were color, fire, water, wind ... Although dead prematurely, the influence of Yves Klein is considerable for the visual arts.

"I shot a small 16mm color film on my 1957 Blue Age exhibitions." I needed a comment, preferably by an art critic. I then asked Charles Estienne to kindly push, during some twenty minutes that lasted the small film, cries blue ... / These cries are cries contained long enough and supported with vigor: he had asked me fifteen days to train before you register.

This is what Klein says about the famous IKB blue (International Blue Klein) a declared way of painting at I.N.P.I. Klein's Blue is a trademark and a state of mind, sealed by its monochrome practice, that is to say, to paint with a roll on a canvas surface. The color is united, do not tremble. It is a color without pathos. There are of course other colors, but what counts is in the evocation of these blue cries, the radicality of the gesture, its continuity, the route to trace, especially with the intervention of the body, the famous Anthropometries that will come thereafter.

The Rodez exhibition is a solid retrospective of some fifty pieces. We are keen to present a set of representative paintings of the work which, if it was short in time, remains considerable, more than 1500 paintings: Monochromes, Reliefs sponges, Fire paintings, Sculptures sponges, Anthropometries , Portraits reliefs, Earth Globes, Cosmogonies, Obelisks, Exvotos, Monogolds ... The exhibition is completed by videograms, photographs, transaction documents designed by the painter with his collectors, books ... The presentation is also related to collaborations with the sculptor Jean Tinguely and Claude Parent, forming the beginning of a chronological journey from ingenious inventions, an umbilicus in a way: "Pneumatic rocket", "Architecture of the air", "Fountains of Warsaw" and "Excavator of space".

"Once upon a time, I had refused the overly psychological brush, to paint with the more anonymous roll, and thus try to create a" distance "at least intellectual, constant, between the canvas and me, during the execution".

The exposure to Rodez is the emergence of a laboratory of ideas and forms, close to the human, like a revolution. Klein's nude models, coated with pigments, brushing flame and fire, freely navigate the surface of the canvas; the imprint is not authoritarian. It's freedom.

Blue screams ... has the crucial contribution of the Archives Yves Klein, Paris, acting in loans, but also present in the police station (Daniel Moquay, president of the Archives, and Benoît Decron, curator of the museum Soulages, the two associate commissioners). It's a close partnership. We benefit from exceptional loans from MAMAC in Nice, Carré d'Art in Nice, Mnam-Center-Georges-Pompidou, to which we must add private collectors separating during the summer of rare works, or even never shown. Some works have not been presented for 25 years ... these collectors are from the very beginning.

Pierre and Colette Soulages - this is the 100th anniversary of the painter in 2019 - are part of the exhibition. The Soulages couple, from the end of the 40's, was very close to Klein, Marie Raymond, Fred and Yves. It is at the color shop, Edouard Adam, in Paris, that Pierre Soulages becomes aware of the novelty of powdered ultramarine blue, the future IKB. He meets Yves Klein in research, who is interested in the store's barrels of pigments ... 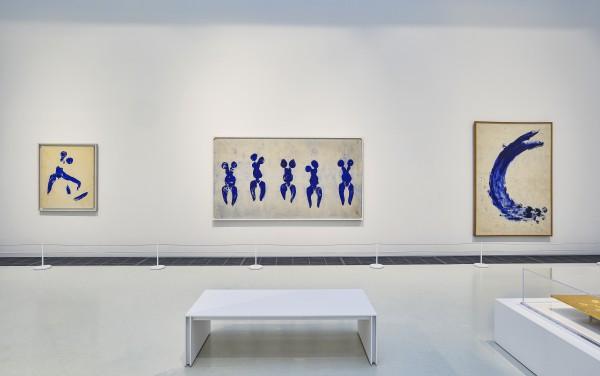