This materialisation of the immaterial that obsesses him, Klein will also try it in 1961, a year before his death, in his "Fires", combustions of strong cardboard (in asbestos and swedish wood pulp supercompressed) operated by means of industrial burners with coke gas. Klein realizes these works prosaically at the Plaine-Saint-Denis, at the Experimental Testing Center of Gaz de France. The burner serves as a brush. Beside the artist, a firefighter monitors the operations, and participates: a jet of water to extinguish or to modulate the flame. The first "Fire" bears a moving mark: the canvas is pierced in a corner. Klein was still handling his flame brush with clumsiness.

Sulfur colors, oriental, barbaric, eat space. Burn sometimes mineralizes the picture. Sparks seem to glow. In some boxes, the fire is not controlled. On others, brown calcinations arise as stylized flowers in symmetrical rows. Here, the fire only licked the canvas. Elsewhere, the trace is accentuated, the smoke is marked. Further on, the asbestos seemed completely burned, charred pieces are ready to crumble. Klein takes up the process of "Anthropometries": he smeared nude women with paint. They then rubbed on the canvas to print it. Now water replaces the painting. Women, wet torso, apply on dry surfaces. The soaked parts escape the fire, drawing in this iron hell paler beaches. The two elements mixed - the fire corrects the water or vice versa - often organize harmonious ballets, too "pretty", decorative. Then return values that Klein wanted to purge the painting: polychrome, show, dramatic emotions, feelings - a literature.

Text of France HUSER written during the exhibition. 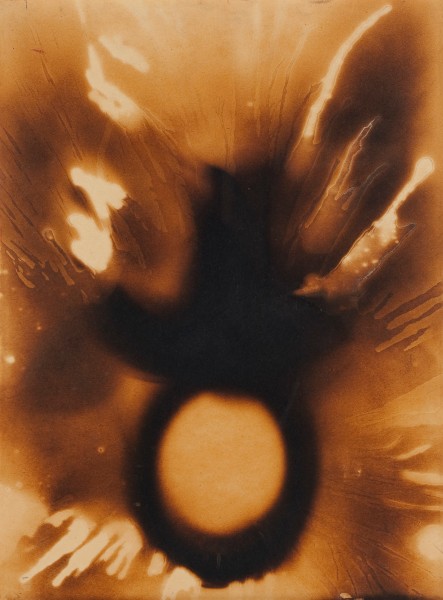